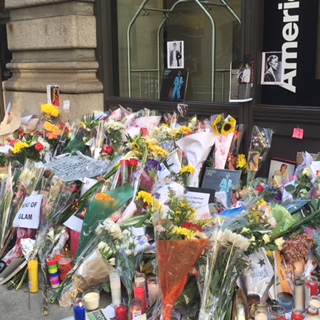 In addition, the television news magazine, “60 Minutes” on which Bowie appeared back in 2003 has just released some never before seen clips from that interview.

Here’s some of what Bowie said in the clips:

“I was never particularly fond of my voice. I never thought of myself as a singer,”said Bowie in one of the clips. “Because no one else was ever doing my songs, I felt I had to go out and do them”
He also said, “For many years, I wasn’t comfortable being a singer. I would have much preferred other people doing my songs.”

The flowers, candles and posters continue piling up in front of his Lafayette Street resident in New York City. Above you can see what it looked like by early Tuesday morning.

As of yet, no funeral plans have been made public.

What was your favorite David Bowie album or song? Weigh in!