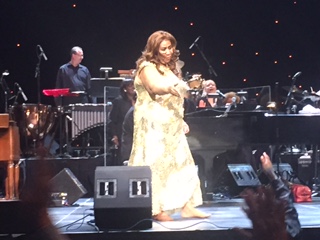 This time the Queen of Soul appeared before a packed house at the Mohegan Sun Arena in Uncasville, Connecticut.

The multiple Grammy-winning singer emerged from the wings in a floor-length off-white gown with short sleeves and long auburn curly locks. She kicked off the concert with “I Knew You Were Waiting”, a song released as a duet with George Michael in 1987.

Over the course of the 90-minute concert, Franklin performed 14 songs. After what she says has been 50 years in show business, the Queen of Soul can still raise the roof with soaring vocals and imbue old standards with a new twist.

She proved that during the concert’s first half which consisted of classic Aretha songs. Among them: “Think,””Till You Come Back To Me,” “Gotta Find Me an Angel (during which a ballet dancer emerged to dance alongside Franklin) ,”You Lie”and “Chain of Fools.”

One of the highlights of the first half came when Miss Franklin performed “Natural Woman.” The song has experienced a resurgence since the Queen of Soul performed her rendition last month on The Kennedy Center Honors CBS broadcast in tribute to singer-songwriter Carole King.

After about 45 minutes, Franklin left the stage for a brief break.  During the interlude, the approximately 20 musician-orchestra under the direction of her long-time conductor H. B. Barnum played instrumental music. Of special note:  pianist Richard Gibbs playing drew thunderous applause from the approximately 7,000 concert goers.

After about 10 minutes, the singer returned to the stage –this time opting for a floor-length gold sequined gown with sparkling high-heeled shoes to match. She kicked off the second half of the concert with her rendition of the Gloria Gaynor classic “I Will Survive,” which she recorded for “Aretha Sings the Great Diva Classics,” the CD released in 2014. She segued into her rendition of another song on the album: “People,” originally recorded by Barbra Streisand.

The night was especially poignant as music lovers were mourning the New Year’s Eve death of Grammy Award winning singer, Natalie Cole. Miss Franklin could not let the night pass without paying homage.  As a tribute, she asked for a moment of silence for the “lovely and gifted Miss Natalie Cole.”  Then, Franklin sat at the piano playing and singing a few bars of a song synonymous with Miss Cole: “Inseparable.” Franklin said, “We will always remember this very classy and sophisticated lady. Thank you for all the great music Natalie. God bless you.”

The Queen of Soul remained at the piano for another highlight of the second half, her gospel-infused rendition of  “Bridge Over Troubled Water”, from the Paul Simon and Art Garfunkle songbook. She segued into a musical call-and-response filled with testimony of overcoming an undisclosed illness back in 2010. She sang that doctors were telling her “one thing that I didn’t agree with.” She sang that she returned later in the year and the doctor said,”Ms. Franklin, that thing we saw before we don’t see no more.” Her testimony of overcoming illness was made even more poignant in light of Natalie Cole’s untimely death.

Franklin ended with “Freeway of Love” –periodically pointing the microphone at the audience as an invitation to sing along. Then, she exited only to have the audience summon her back for an encore during which she performed her quintessential song, “Respect.” As a special New Year’s Day bonus, the Queen of Soul led the audience in “Auld Lang Syne” —welcoming the New Year as confetti rained down on concertgoers.

“I want everyone here that God has been good to within the sound of my voice to give thanks,” Franklin told concertgoers –thankful to hear the Queen of Soul usher in the New Year in song!