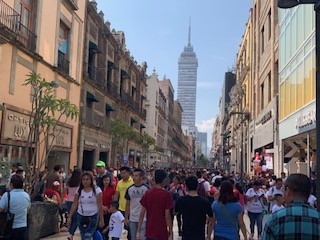 To get a bird’s eye view of Mexico City, visit La Torre Latinoamericana.

The 44-story skyscaper is the tallest building in the Centro Historico (the Historic Center) of Mexico City.

You should visit the top floor of the tower. It costs about $120 pesos mexicanos. From there, you can see a particularly great view of the nearby Palacio de Bellas Artes.

There, you can see amazing 360-degree views of Mexico City, which will give you an idea of the expanse of the city of nearly nine million residents.