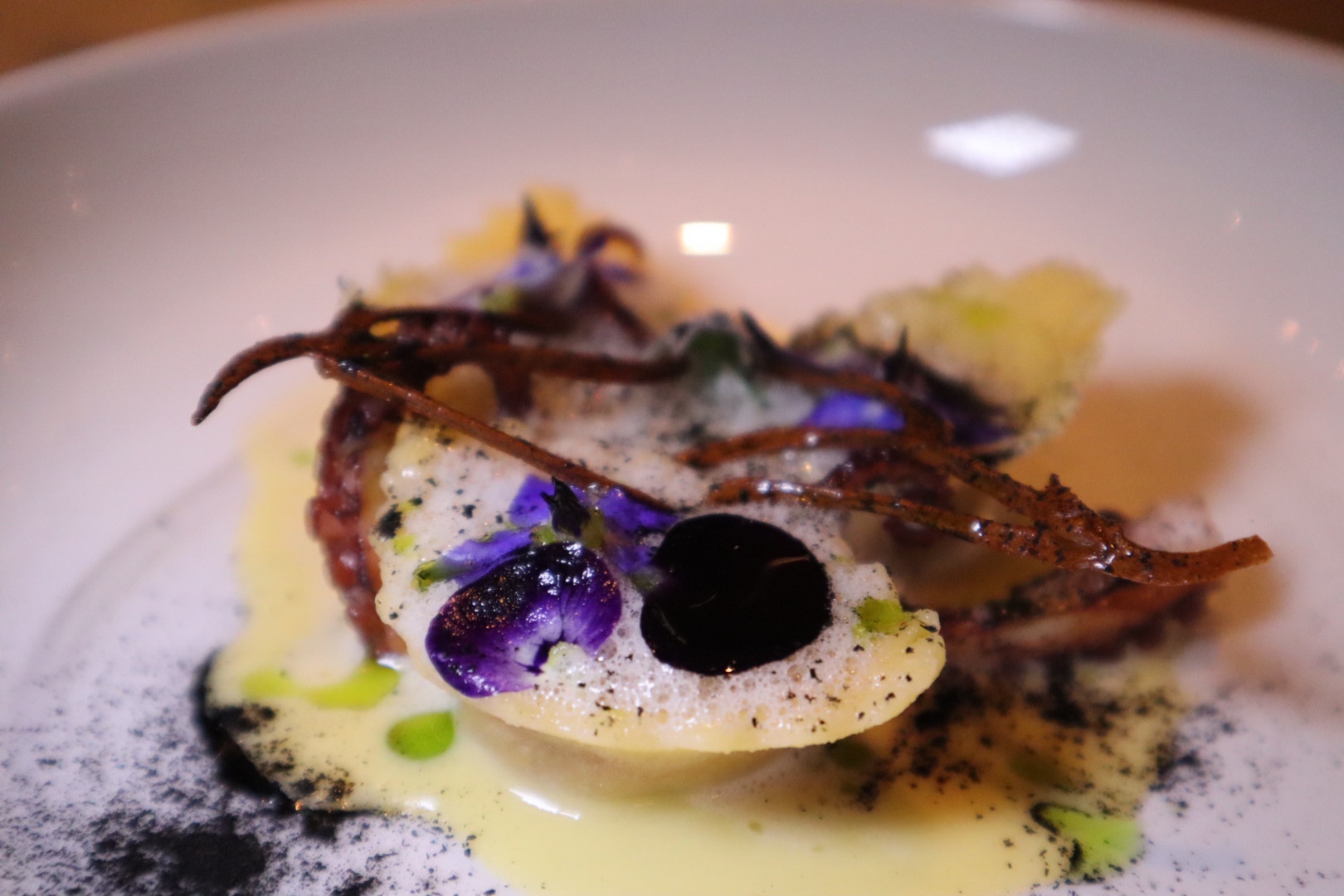 If you want an amazing Michelin-level dinner while in Buenos Aires, run (don’t walk) to Chila!

Restaurante Chila is located in the Puerto Madero area of the Argentinian city.

For several years, it has been named one of the top 50 restaurants in Latin America. As of this writing, Trip Advisor ranks it the 24th best restaurant of nearly 6,000 in the city.

The modern space Chila inhabits provides a sophisticated, yet not stuffy, experience for diners.

Do yourself a favor: Try the tasting menu, which included elements from various regions around Argentina.

To start, the waitress presented us with a wooden box wrapped in tissue paper with a strip that said this: “Tear here.”

Upon tearing the strip, I opened the paper to reveal not only the menu but an amuse bouche: a Jerusalem artichoke, to wet the palate.

Next, two types of butter accompanied brioche rolls. One made with milk from grass-fed cows in Patagonia; the other made from Dutch cow milk. It was referred to a “blue butter” because it undergoes a fermentation process similar to that of blue cheese.

The waiter then served cow’s brain pate. Though it might sound less-than-appetizing, it was smooth, buttery and sublime.

Tenderloin cow ham was also served. It was nice and subtle without being too salty.

Lentils cooked in kimchi broth with shitake mushrooms with herbs came next. They were served with grilled, deep-fried cabbage which was crunchy and had a subtle kimchi flavor.

Next, I was tantalized by Pasta Tortellini filled with fish from the Parana River in Northeast Argentina. Octopus tentacles from a South Argentinian region accompanied the dish. Chips made of black garlic and potato garnished the dish, which was simultaneously soft, chewy, crunchy and sweet.

Dry-aged beef arrived at our table with roasted in a celery and coriander sauce with spinach.

The following dish: Sea Bass served with a puree of parsnips and white chocolate.

Beetroot caramelized with lamb fat came served with a sauce made of grapefruit. The accompaniment: beetroot chip with guanciale, a type Italian cured meat, typically made of pork.

Pre-dessert came in the form of two cones, made of rice, filled with two flavors of sorbet: passion fruit and green apple with raspberry chips.

That was followed by slivers of caramelized quince  (known in Spanish as “membrillo”) in the form of an up-side down cone, covering a lime, lemon and orange sorbet.

As if that were not enough, yet another dessert came out in an edible box, made of rice. The rice is first prepared as a puree. Its dried form is used to form the edible box, filled with dulce de leche and chocolate.

For a wonderful meal in Buenos Aires, don’t miss Chila!