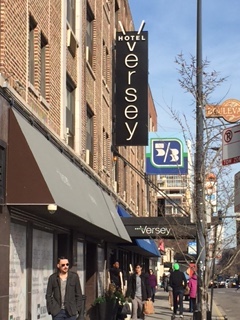 If you are looking for a low-key, boutique hotel in Chicago, try The Hotel Versey.

It is located at 644 West Diversey Parkway, east of North Orchard Street at the border of the Lincoln Park and Lake View neighborhoods.

It is easy to see why Architectural Digest called it one of the “12 Best Designed Hotels” that opened last year. The decor includes loads of quirky design details. Upon entering the hotel, you walk through what is referred to as the “Art Arrival” corridor. The hallway opens to a spacious lobby filled with mid-century modern furniture perfect for holding court with family or friends.

Check out this video that provides you a virtual tour of the entrance and lobby!

Among the notable pieces of art in the lobby: “The Headline” (made by the Spike Lighting Company) helps illuminate the lobby.

Board games stashed on the shelves are available if you have an inkling to play Chicago Bears Trivia or Battleship.

A special machine emits a soothing lavender scent into the air.

The hotel only has one elevator, but it never seemed there was an excessive wait for it. The single elevator opens up to kitschy cartoons that greet you on each floor with sayings written in a floating bubble.

Many sayings reference lyrics from songs such as “Knock Three Times” recorded back in the Seventies by Tony Orlando and Dawn.  This may why music bands such as Radiohead and Nirvana have reportedly stayed at the hotel.

I stayed in a standard room with my friend Erik who selected the hotel.

Our room had two full-size beds dressed with crisp, cotton linens. Murals in the rooms feature iconic Chicago sites such as Wrigley Field, the Navy Pier or the city skyline.

A Samsung flat-screen television, an Amana heating and air-conditioning unit that you control, free Wi-fi and a Nespresso machine are among the amenities that come with your room.

But if you want to go out for coffee, the hotel provides guests with a coupon for a FREE donut at Stan’s Donuts  (50 steps away from the hotel) with a coffee purchase. (There is no restaurant on-site.)

The bathroom is utilitarian. It comes with all the necessities: a sink, a toilet (with a plastic seat!) and full bathtub with a shower decorated with white subway tiles.

The organic goat’s milk products from the Beekman 1802 line provide the bath with a spa-like touch that would please the soap makers, Josh Kilmer-Purcell and Brent Ridge. (They gained notoriety on reality television program, “The Fabulous Beekman Boys” that appeared on Planet Green and The Cooking Channel).

While The Vestry doesn’t have an on-premises gym, guests can use the LA Fitness at the nearby Century Plaza Shopping Center for free by showing a hotel room key and photo ID.

The location is perfect if you are a sports fan. Wrigley Field is walking distance. If you feel like running along Lake Michigan, the waterfront is about a half-mile east of the hotel. The hotel is also near the Lakeview neighborhood known as Boystown for the variety of bars that cater to an LGBTQ clientele.

For an overall comfy stay in a cool, hip Windy City hotel, stay at The Hotel Versey!

If you want to check out a great brunch or lunch spot in Chicago, check out this chic eatery:

2 thoughts on “The Hotel Versey: Chicago, Illinois: The Lowdown!”