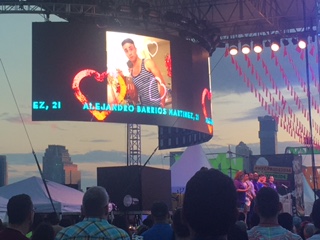 New York City residents and visitors are gearing up for an historic Gay Pride Weekend.

The highlight of the night was hearing from the owner of Pulse, a gay nightclub in  Orlando, Florida. On June 12th, a gunman opened fire at the club — leaving 49 people dead and 53 injured. Nightclub Owner Barbara Poma addressed the crowd. “Today we must also use this opportunity to comfort one another. We will not allow hate to prevail,” Poma said. “It is our time to show that love will conquer hate – that we are one pulse — that we are one nation.”

Prior to Poma’s speech, a group took to the stage and read aloud the name of the victims of the Pulse Nightclub massacre. An overhead screen displayed the images and names of those victims.

In light of the recent massacre, security was notably beefed up. Attendees had to pass through a checkpoint to get into the event. Security personnel poked through bags and scanned attendees with handheld metal detectors before permitting them onto the pier.

The 2016 NYC Pride Rally is the 47th annual rally. The first occurred a month after the Stonewall Riots in June 1969. That’s when about 500 people gathered for what they called a “Gay Power” demonstration in Washington Square Park and a candlelight vigil in Sheridan Square.

The annual Pride Parade is scheduled for Sunday, June 26th in Manhattan. Marchers will step-off at Noon from 36th Street and Fifth Avenue in Manhattan. The route ends at Christopher and Greenwich Streets.

For more information about NYC Pride 2016 events, check out https://www.nycpride.org/events