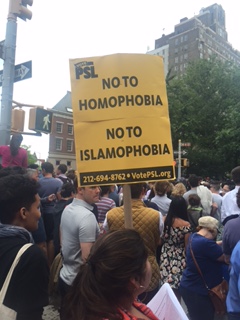 It happened over the weekend in Florida. A gunman, identified as 29 year-old Omar Mateen, left 49 people dead and more than 50 wounded after opening fire at Pulse, a gay nightclub in Orlando. Law enforcement officers shot and killed the gunman.

New York Governor Andrew Cuomo, Mayor Bill DeBlasio and other speakers addressed demonstrators who gathered in front of Stonewall Inn, a gay rights landmark, around 7pm in the West Village. Demonstrators held signs that said “We Are Orlando” and “No To Homophobia”.

Governor Cuomo railed against laws that allowed a “madman to buy assault weapons.”
The governor said, “This (mass shooting) is an American curse. It is not an international curse. This was not a senseless act. There was a method to the madness. They targeted the LGBT community and that is vile. That is evil. That is hatred.”

“Let’s say tonight with this emotion we feel that this is the day that the federal government must promise us that they will pass sensible gun control,” Cuomo said. “We are Orlando here in New York. By coming here tonight, we are sending a message that we are not less than, that we are equal and our lives must be respected.

In closing, Cuomo said, “Let us join hands and let us say to the world, we are all in this together.”

President Obama heads to Orlando Thursday to pay his respects.