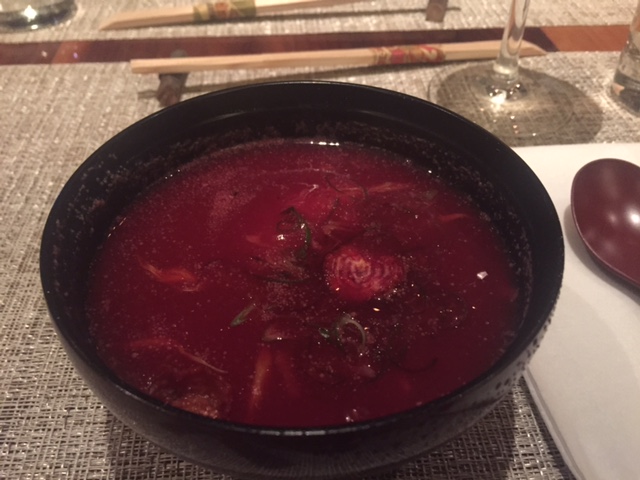 If you want to try Japanese-French fusion food when you are in New York City, head to a new restaurant in the East Village: Autre Kyo Ya.

It opened at 10 Stuyvesant Street, east of Third Avenue about a month ago. “Autre” means “other” or “different” in French. The name refers to the fact that this new restaurant is the counterpart to Kyo Ya, a Japanese restaurant on East 7th Street.
At this addition to the downtown restaurant scene, Executive Chef Shuji heads up the kitchen. According to a restaurant bio, he has worked at  French restaurants in Japan and at Ze Kitchen Gallerie, a Michelin-star restaurant,  in Paris.
Upon arriving in Autre Kyo Ya, you are greeted by French doors. However, the restaurant’s décor largely features traditional Japanese elements. Cedar wood beams cross the ceilings. Shoji-screens cover the windows. The bar, tables and chairs are made of natural wood. Restaurant owners say decorative tiles have been shipped in from Japan.
Placemats made of natural bamboo fibers line tables. A pair of chopsticks leans across a short wooden peg at each place setting.
To start, select a drink from the menu’s variety of choices: red and white wines, champagne, saki and beer. Suspecting I might choose fish as my entree, I opted for a glass of Chilean Montes Sauvignon Blanc 2015 ($12). It  was pale yellow, crisp and fresh. If you want a more traditional Japanese wine, you may want to try the Hanagaki Junmai saki which smells of steamed rice.($17 per glass)

The menu offers both hot and cold appetizers–ranging in price from  $9 (roasted beet soup with artichoke root, shiro miso and enoki-kombu broth) to $15 dollars (Yuzu Smoked Salmon with celery roots, spinach-yuzu kosho sauce). The sweet, freshness of the beet soup was deliciously subtle without being overbearing. Combined with the soup’s deep magenta color, the taste and warmth made it a perfect starter for an early February night meal.

Main courses at Autre Kyo Ya range in price from $23 (Atsu-age & Yasai fried tofu with seasonal vegetables and dried tomato kake-dashi) to $42 (roasted autumn fish for two with seared cauliflower, garlic anchovy sauce and fingerling potatoes). I selected the Gindara Tsubu-Miso strategically placed on a grey slate slab. The waitress explained that the dish is made of black cod marinated in miso for three days accompanied by roasted shallots (frequently used in French cooking) and pickled kohlrabi for $28 (pictured here).

The  dessert were somewhat limited. You can opt for a piece of chocolate cake or red ben curd yogurt. They were both miniature in size — keeping with the Japanese minimalist aesthetic.
Unlike many other places where I have tried Japanese food, I felt satiated after eating at Autre Kyo Ya. So, if you want to try a new twist on Japanese food that will leave you feeling satisfied, head to Autre Kyo Ya for a pleasant culinary treat.
For more information, here is a link to the restaurant’s website: http://www.autrekyoya.com/